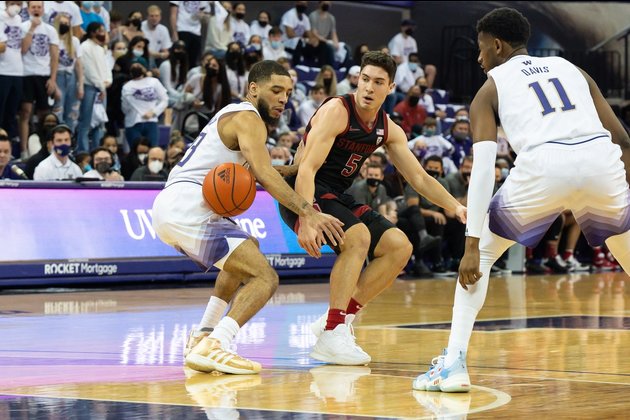 Washington has put the bite back in its defense.

When the Huskies won the Pac-12 title by three games in 2018-19, they mastered the 2-3 zone defense coach Mike Hopkins learned in two-plus decades as an assistant to Jim Boeheim at Syracuse. Matisse Thybulle was named the national defensive player of the year.

The Huskies struggled defensively the past two seasons and finished 12th and 11th in the Pac-12.

They went 5-5 in nonconference play this season but have ramped up their defense since the start of the calendar year. They're forcing a league-leading 18.1 turnovers per game, which ranks eighth in NCAA Division I, and 9.4 steals, tied for 21st nationally.

"We've been making (defense) our staple lately," said Jamal Bey, who scored all of his season-high 17 points in the first half of Saturday's 67-64 victory against visiting Stanford. "No matter what's going (on), if the shot is not falling, we're playing defense ... and trying to turn people over. That helps us a lot."

Huskies guard Terrell Brown Jr., a transfer from Arizona, leads the conference in both scoring (21.0 points per game) and steals (41).

"We have some moments that it's just elite," Hopkins said of the defense. "The guys are flying around. They're competitive ... . When we're locked in and loaded and needing to get a stop, this is a lot like a couple of years ago with the defensive-minded guys that they are."

The Beavers haven't been able to take advantage of their surprising run to the Elite Eight last season, following a season-opening victory with 10 straight losses.

After beating Utah for their first conference win, they've lost three in a row, though they had chances against both Oregon and USC before being blown out 81-65 by No. 3 UCLA on Saturday at Pauley Pavilion. Jarod Lucas and Dashawn Davis led OSU with 12 points apiece.

"We just need that one spark," Beavers coach Wayne Tinkle said. "We will continue to fight and grind."