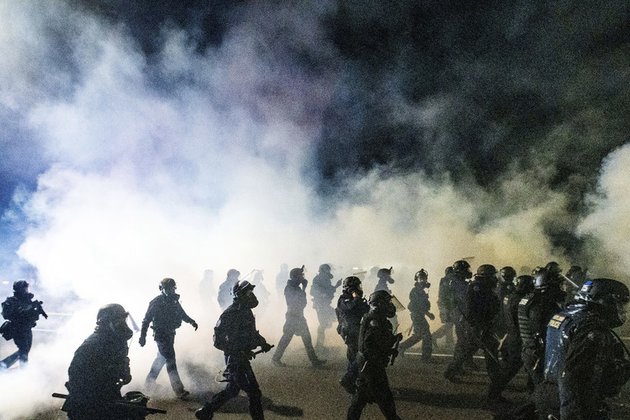 The Portland Police Bureau has launched an investigation after a ?right wing meme? about officers beating a ?dirty hippy? with dreadlocks was included in a police training presentation.

The meme - which was turned over to lawyers for the Black Lives Matter group 'Don't Shoot Portland' last year - was made public last week and showed controversial text laid over an old image of a police officer beating a protester.

The activist group is suing the city of Portland for using "excessive force" against demonstrators during the George Floyd protests in 2020.

"And the Lord said... Woe be unto you, dirty hippy: For thou stinketh of patchouli and BO," the text read, describing the protester as having "dreadlocks and white skin."

"I shall send among you my humble servants with hat, and with bat, that they may christen your heads with hickory and anoint your faces with pepper spray," the meme continued. "And once thou hast been cuffed and stuffed; Once thou has been stitched and bandaged; Perhaps you shall learn, I'm tired of your s**t."

The meme was allegedly included at the end of a 110-slide police training presentation and the person who included it has not yet been identified.

In a statement on Friday, Portland Mayor Ted Wheeler said he was "disgusted that this offensive content was added to a training presentation for our police officers" and claimed that a "thorough and complete investigation was under way."

"I believe that the hardworking members of the Portland Police Bureau who are seeing this for the first time are also angered and disgusted by the image and the words on this slide and how it portrays members of our community and law enforcement," the mayor continued, concluding that Portland Police "must reject the harmful and divisive attitude expressed."

According to The Oregonian, the meme originates from the Fraternal Order of Alt-Knights - a right-wing street militia that has been known to clash with anarchists. The Southern Poverty Law Center describes the FOAK as being the "tactical defense arm" of the Proud Boys.

In 2020, riots broke out in Portland over the police shooting of African-American George Floyd in Minneapolis. Peaceful protests in the city quickly devolved into civil unrest, including looting, arson, vandalism, and violence. One man, Aaron Danielson - a supporter of the right-wing group Patriot Prayer - was shot and killed by an Antifa supporter during the unrest.

Last year, after one police officer was indicted on charges related to the riot response, an entire team of 50 police officers voted to resign in protest.