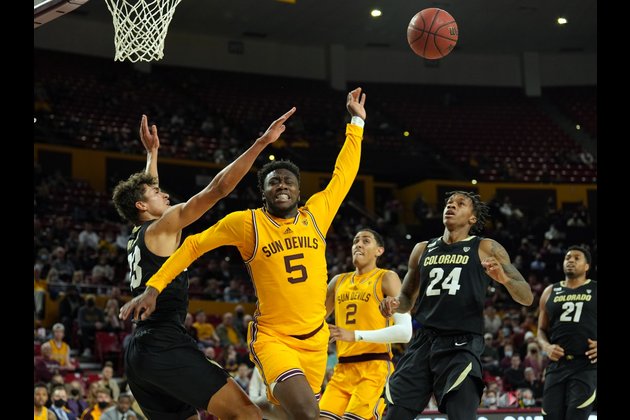 A losing streak will end when Utah visits ASU

Either Utah or Arizona State will break back into the win column Monday afternoon when they meet in a Pac-12 game in Tempe, Ariz.

Utah, playing under first-year coach Craig Smith, has lost four conference games on the road against USC, Oregon State, Oregon and Arizona by an average of 15.8 points.

Arizona State, which has had four recent games canceled or postponed by coronavirus protocol, has been routed in its two Pac-12 home games, losing to Washington State 51-29 and to Colorado 75-57.

This game with Utah was originally scheduled for Jan. 13 but was postponed until Monday.

Jalen Graham has missed recent practices because of illness -- he tested negative for COVID-19 -- but returned to practice Friday and played in Saturday's loss to Colorado, leading the Sun Devils with 16 points and five rebounds.

"I mean, no excuses, but when you sit out five days, or a week, and you got to practice only two days, and you gotta wear a mask, it just a little hard, it's different," said Graham, who played only nine minutes in Arizona State's previous game Jan. 2, a 74-50 loss at California.

Utah trailed by only one point with 12 minutes remaining at No. 6 Arizona on Saturday, but the Utes wound up losing 82-64. They are still without center Brendan Carlson, who is out for two to three weeks with an abdominal injury.

The absence of Carlson and his average production of 13.5 points, 6.4 rebounds and 2.1 blocks, has left Utah thin up front. Arizona scored 56 points in the paint, including eight consecutive possessions (including a couple of fouls that led to free throws) to pull away.

"Some things started to get away from us, obviously," Smith said of Arizona's 18-0 run. "We went on that big scoring drought and had just too many turnovers."